Clatter is a small village in Montgomeryshire, located in the community of Caersws and lies on the main A470 road between Carno and Caersws village, some six miles west-north-west of Newtown. Within the former Clatter Primary School is a simple marble memorial plaque which commemorates the three former pupils of the school who fell during the Great War. 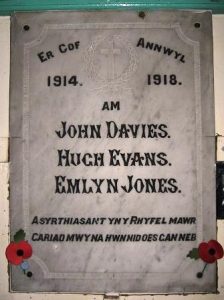 John Davies, Private, 55393, Royal Welsh Fusiliers. John was the son of David and Elizabeth Davies, of Llwydcoed, Llanwnog, Caersws. He enlisted at Newtown into the Royal Welsh Fusiliers and was drafted to France in the summer of 1916-17, joining the 19th Battalion, Royal Welsh Fusiliers. The battalion was attached to 119 Brigade, 40th (Bantam) Division and had been on the Western Front since June 1916. Late in 1916 the Division moved south to the Somme, and fought at the Battle of the Ancre, before remaining in the sector over the winter. In March 1917 the Germans withdrew to their shortened line, called the Hindenburg Line, and the 40th Division was among the units which followed the withdrawal. Later in the year the Division took part in the Battle of Cambrai and launched an attack on Bourlon Wood on 23 November 1917. The attack was carried out by 119 Brigade, led by the 12th SWB and 19th RWF. The 17th Welsh was in support for the initial assault, but was soon ordered to advance, to support the two attacking battalions. Heavy fighting raged within the wood over the coming days, with the 18th Welsh also being thrown forwards into the fight, and the Division suffered terribly. John was wounded during the fighting for Bourlon Wood and was evacuated to a nearby Casualty Clearing Station where he died of his wounds on 26 November 1917. The 22-year-old is buried in Rocquigny-Equancourt Road British Cemetery, Manancourt, France.

Hugh Evans, Private, 55201, Royal Welsh Fusiliers. Hugh was the son of Richard and Elizabeth Evans, of Cerrigybrain, Caersws. He enlisted at Welshpool into the Montgomeryshire Yeomanry, but in the winter of 1916-17 was drafted to France, joining the 2nd Battalion, Royal Welsh Fusiliers, which was on the Somme attached to 19 Brigade, 33rd Division. During the coming weeks the 2nd RWF received several drafts of reinforcements, and on 8 December the now fully rebuilt battalion moved to new positions at Suzanne, between Bapaume and Péronne. The Division remained in this sector over the coming months, before being transferred to the Arras sector, and reached Henin by 13 April, before the Division took over a section of front line facing the Hindenburg Line. The infantry battalions of the division then began the usual routines of rotating between the front-line, support and reserve trenches and the 2nd RWF took over a position known as Tunnel Trench. On 23 April the 2nd RWF took part in a costly assault on the Hindenburg Line, suffering heavy casualties. The battered battalion then moved to a rest camp at Basseux to rebuild, and by 15 May moved back into the line in the Croisilles Sector. The Division then carried out several assaults against the Hindenburg Line. On 22 April the 2nd RWF moved into the front line, to support the 1/4th Suffolk’s in another assault on the Hindenburg Line. The Suffolk’s launched their assault on the following morning, 24 April 1917 but became held up some 200 yards short of their objectives. C Company of the 2nd RWF followed the assault and began bombing their way forwards. Hugh was killed in action during the ferocious fighting that day. The 23-year-old is buried in Wancourt British Cemetery, France.

Emlyn Jones, Private, 993, Royal Welsh Fusiliers. Emlyn was the son of William and Jane Jones, of Glynawel, Caersws. He enlisted at Newtown into the 7th Battalion, Royal Welsh Fusiliers several years prior to the war. The battalion was a Territorial unit, which mobilised for war at Newtown in August 1914, as part of North Wales Brigade, Welsh Division and moved to Conway until the end of the month, before moving to Northampton. In December the Division moved to Cambridge, where it carried on training. Emlyn took ill two months after arriving in Cambridge and was taken to the East General Hospital at Cambridge, where he died of meningitis on 13 February 1915. The remains of the 18-year-old were brought home and he was buried in Shiloh Methodist Chapelyard, Llanwnog.